The paths of moving light sources

45-minute exposure taken on a dark and clear night in Cerro Paranal, the stars leave trails in their apparent motion around the Celestial South Pole (left). 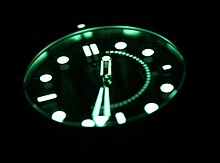 A long exposure photo of a watch in the dark. Note the appearance of the second hand as it rotates, showing that this was a 30-second exposure. The hour hand (which has only moved barely) is clear, while the minute hand is slightly blurry from a half a minute of movement.

When a scene includes both stationary and moving subjects (for example, a fixed street and moving cars or a camera within a car showing a fixed dashboard and moving scenery), a slow shutter speed can cause interesting effects, such as light trails.

Long exposures are easiest to accomplish in low-light conditions, but can be done in brighter light using neutral density filters or specially designed cameras.

Long-exposure photography is often used in a night-time setting in order to produce a near daytime effect in the photo. By leaving the camera’s shutter open for an extended period of time, more light is absorbed, creating a brighter product. If the camera is stationary for the entire period of time that the shutter is open, a very vibrant and clear photograph can be produced.

In this technique, a scene is kept very dark and the photographer or an assistant takes a light source—it can be small penlight—and moves it about in patterns. The light source can be turned off between strokes. Often, stationary objects in the scene are illuminated by briefly turning on studio lights, by one or more flashes from a strobe light, or by increasing the aperture. 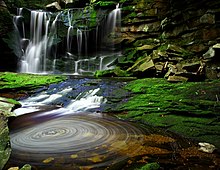 A 30-second-long exposure sharply captured the still elements of this image while blurring the waterfall into a mist-like appearance. Debris in the swirling water in the pool forms complete circles.

Long exposures can blur moving water so it has mist-like qualities while keeping stationary objects like land and structures sharp.

A Solargraph taken from ESO‘s APEX at Chajnantor.

Solargraphy is a technique in which a fixed pinhole camera is used to expose photographic paper for an extremely long amount of time (sometimes half a year). It is most often used to show the path taken by the sun across the sky. One example of this is a single six-month exposure taken by photographer Justin Quinnell, showing sun-trails over Clifton Suspension Bridge between 19 December 2007 and 21 June 2008. Part of the Slow light: 6 months over Bristol exhibition, Quinnell describes the piece as capturing “a period of time beyond what we can perceive with our own vision.” This method of solargraphy uses a simple pinhole camera securely fixed in a position which won’t be disturbed. Quinnel constructed his camera from an empty drink can with a 0.25mm aperture and a single sheet of photographic paper.

On February 3, 2015 a pinhole camera used in a Georgia State University solargraphy art project was blown up by the Atlanta bomb squad. The device, one of nineteen placed throughout the city, had been duct-taped to the 14th Ave. bridge above I-75/85; traffic was shut down for two hours, and the remaining cameras were later removed by authorities.